For several months a number of friends and colleagues have been getting together on the last Sunday of the month for a life drawing/painting session. Yesterday was the last session before a long summer break - we won't get together again, at least in that setting, until the end of September. We didn't have a large turnout, only six of us, but there was some very good work accomplished.

I chose to tackle the water miscible oils again. I'm really enjoying them, and I love walking into my studio to be met by the odour of oil paint. I suspect I will be painting less often with acrylics in the future.

This is a small study, 12"x16", on a previously enjoyed canvas panel. I framed the face with the hair and dark clothing first, blocking it in very quickly, trying to get the big shapes in the right proportion to one another. Then came the longer, often frustrating construction of the face itself - reshape that cheek, warm up the nose, scrape off the eyes and try again, try to get that little quirk in the corner of her mouth... It just goes on and on, until either time runs out or you don't think there's anything else you can do, short of starting fresh.

Don't get me wrong, there is nothing to compare with joy of creating an image, either on paper or canvas or the digital screen. But don't let anyone ever tell you it isn't work!

To be honest, while the likeness to the model is evident, it's not a very good portrait. But as a painting exercise I'm quite pleased. And I can't wait to get together with my painting buddies again in the Fall.

Posted by Scott Cooper at 11:27 AM No comments:

Yesterday was a big event at Riverwood Park in Mississauga - the official opening of the MacEwen Terrace Garden. This has been a long, on-going project, and the city planners are rightfully proud of the product. Not that it's yet finished - they expect there will continue to be improvements over the coming years.

Visual Arts Mississauga, as one of the partners in the park, was involved in the activities, including several painters on site, mostly doing plein air demonstrations. I was pleased to be part of the crew.

It was an unsettled day here, mostly overcast with the threat of rain and thunderstorms, so I set up under the shelter of the front entrance to VAM's Art Centre. I had a great view of one of the towering Eastern White Pines, over the rooves of the MacEwen Barn and the utility shed. I purposely chose a vetical orientation to accentuate how imposing the big pine was on the scene. Working with water miscible oils I started the way I usually do, blocking in the composition on a toned panel, indicating the general silhouette of the subject. 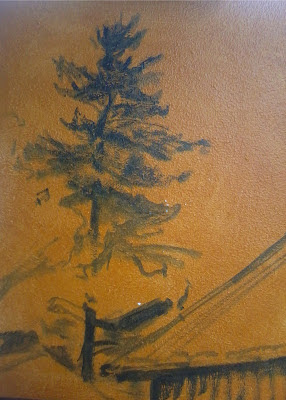 I generally like to get in the lights and darks early, and that usually means getting the sky area blocked in pretty much right away. Even though it was very overcast, there was a fair bit of variation in lights and darks and warms and cools. Passersby were very interested and several came back more than once to check my progress. 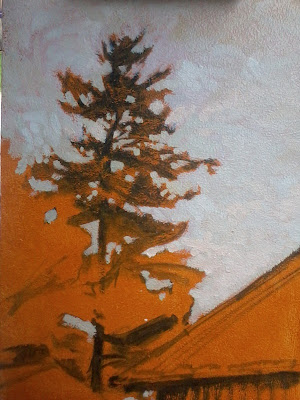 I next worked on the mid tones and shadows of the midground maples. The colour wasn't anywhere near as intense as it would have been on a bright day, and I have dulled it a bit more to keep the interest on the pine. 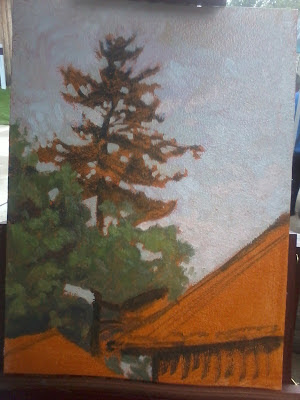 I reserved the darkest darks for the pine, and had a lot of fun with the shadow shapes. Again, because of the day, the colour is somewhat subdued, but the big, dark shape of the pine against the lighter sky dominates the composition. The rooves of the buildings are metal, probably aluminum, and they tend to reflect what's happening in the sky. Throughout the session, as the light varied, sometimes the rooves were lighter than the sky, sometimes darker, so I had to make a choice about what was best for the painting. My preference was to use the roof colour to help frame the tree a little, and redirect the viewer's eye away from the bottom right corner, at least a little. Please check out my "first pass" of a digital portrait at my other blog:

Back To The Drawing Board
Posted by Scott Cooper at 10:42 PM No comments:

I've really been enjoying the opportunities I've recently had to spend time drawing and painting from the figure. It's been quite a while since I spent any time in a figure class, and it's been great! Yesterday, for the first time in years, I got up the courage to take out the oils, and spent the afternoon with a bunch of friends making this small study. These are water miscible oils, as the studio in question doesn't allow solvents, and I like to have a thin, washy paint for the underdrawing. For the rest it's just paint straight from the tube and a tiny bit of oil to assist with flow. 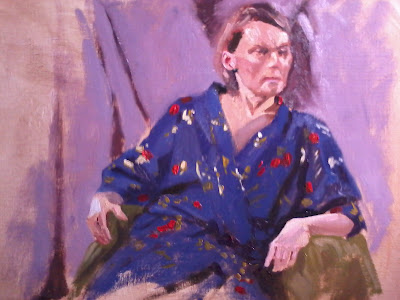 This is small, 12x16, and it took me most of the 3 hour session to bring it to this stage. Overall, I'm very pleased with the visual quality, although it's not a particularly flattering portrait of the model. I'll be drawing her again at Visual Ats Mississauga's Open Studio life session on Thursday. These Thurdsay sessions have been extended through the spring, starting April 4th.

Below are some recent drawings from these sessions, done with carbon pencils and pastel pencils on toned paper. 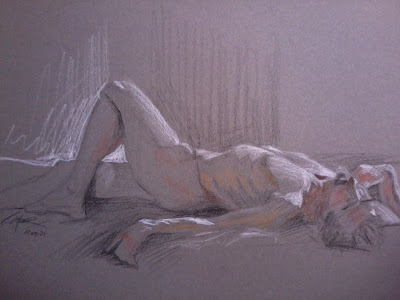 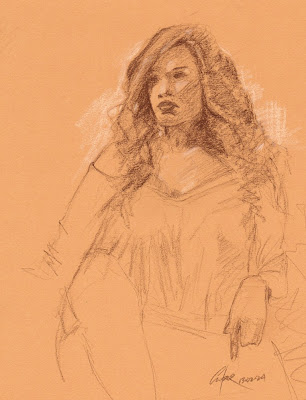 I've been considering trying to do something with oil pastels for a little while, and my friend Aleda O'Connor, who has worked with them for some time, was very encouraging. Much as I love Aleda's approach (and I urge you to check out her blog) I wanted to do something different with them.

Recently, with my acrylic landscapes, the surface texture of the painting has become more and more important to me, to the point where I now regularly texture my panels with various rough grounds and use thick paint where I can. I was hoping that using oil pastels over top of such an acrylic underpainting would yield some interesting results.

So, during a recent landscape class, I coated an acrylic underpainting with clear gesso and took the oil pastels to it. I was very pleased with the results. 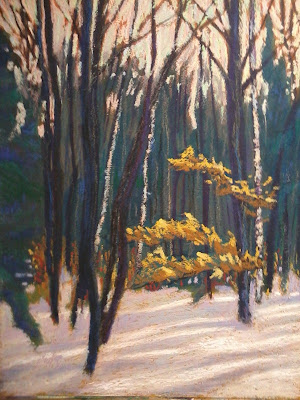 I have also been looking for an approach to figure painting that would allow me a more expressive, gritty feel. I took an abandoned demo of a landscape underpainting and coated it with a pastel ground. I made a very rough, blocky carbon pencil drawing of a figure and overpainted thin acrylic washes to emphasize warm and cool areas, then went to town with the oil pastels. Again, I am very pleased with this little experiment, I think it shows a lot of promise. 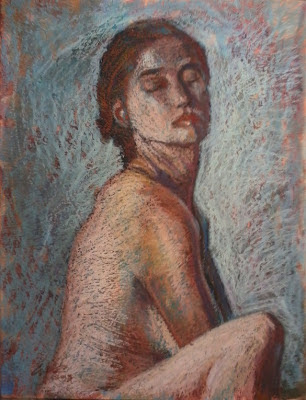 Next, I'm going to try some still life or floral compositions, and see how those suit me. I may be on to my next obsession...
Posted by Scott Cooper at 6:01 PM No comments: