Two In A Row

I'm pleased to report that I have recieved an Honorable Mention for the second consective time in an on-line painting challenge at Artist Mentors Online. The challenge this time was produce a painting without using a brush. Finger painting was encouraged, as was palette knife use. My offering is a an oil sketch, 9" x 12". 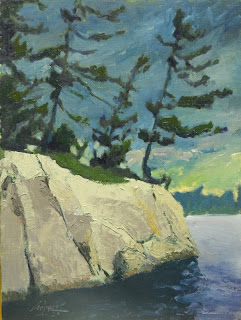 I've never been terribly fond of the palette knife as an actual application tool, but I gave it a go, as well as fingers, Q-Tips, cut up credit cards, paper towels and corrugated cardboard. I will admit that I was surprised at how pleased I was with the results of the knife on the the large rock shape.

You might notice that this painting resembles the image from my previous post. In truth, this one was done first, as a memory exercise; I used no reference. It seems to me that a memory exercise like this is valuable in a couple of ways. One, it tests your powers of observation. Have you really been looking, or just passing through? Secondly, it will emphasize the elements that attracted you to the image in the first place, the elements that inspired you.

My only visits to this area of Georgian Bay have been in full, sunny daylight, and I've never been at this place in a storm, so I don't what possessed me to create the stormy atmosphere, but I think this is a successful concept. I'll likely paint a larger, more finished piece based on this sketch. I might even use some palette knife...
Posted by Scott Cooper at 9:39 AM 1 comment:

I statred teaching again last week and had a very pleasant surprise. Winter can often be a tough time to cajole students to get out, and I expected a minimal number of students for the term, but I came in to a class of 15! It's great to see a bunch of new faces, and a few previous students.

We're working on a class titled the Spirit of Seven. It's an attempt to follow in the steps of the Group of Seven and Tom Thomson, very influential Canadian painters from the early part of the 20th century. Much of their early work was done in Central Ontario, Algonquin Park and Georgian Bay, and further north, in the Algoma region north of Lake Superior. The focus was very much on the ruggedness of the Canadian Sheild landscape.

My demonstration is from Tomahawk Island, on Georgian Bay. This scene exemplifies the subject matter of a great deal of the early work of the Group, and especially Thomson - the rough granite of the Sheild, Eastern white pine, cold lake water and an often brilliant sky. 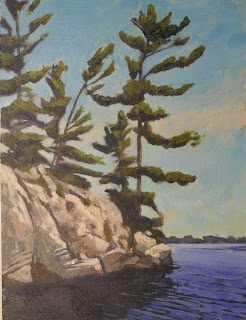 This is acrylic in masonite, 12 x 16. I started with a dull gold wash, or imprimatura, over the entire board. A silhouette of the major shapes was washed in using a large synthetic bristle and a thin ,dull purple. Then, using a similar purple in a thicker mixture, I indicated my darkest shadows. All my drawing was done with brush and paint, a very direct approach. The sky area was roughly brushed in, using some of those colours to help refine the tree shapes. The trees were roughly blocked in with a variety of mixed greens. (I rarely use a tube green.)

The rocks were built up in several layers of various colours. Over the initial wash drawing a more comprehensive  lay-in was done with a variety of dull violet-grays in an attempt to flesh out the forms in the rock face.. Over this underpainting I built up layers of warmer colour, often dragging and scumbling to enhance the texture of the rock. The lightest areas are built up in a more impasto method. 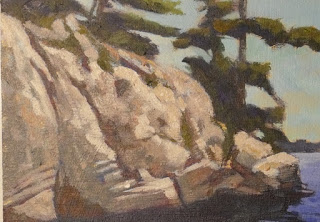 The water was blocked in as a simple gradated shape with a little break-up in the foreground to indicate ripples and waves. The darks here are all the original dark washed in underpainting. The background far shore was initially laid in as part of the overall darkish silhouette, and I simply scumbled a thin pale blue over that area to push it back. Voila! Tomahawk Rocks.

Posted by Scott Cooper at 1:52 PM No comments: