I originally painted this several months ago for a school group presentation at Visual Arts Mississauga, an introduction to creating a painting from the ground up, as it were. I've since been asked to add some explanatory text to the step-by-step photos and post it for others, so here goes.

There are some general guidelines worth keeping in mind, not just for landscape, but for most painting:

Paint from the big shapes to the smaller details - don't get trapped in each and every detail at the first stage. Use large brushes at first, switching to smaller as you need to add detail or refinement. (You may find, as you go along, that there are lots of details that can be left out.) You don't have to paint every leaf and flower petal - leave the greatest detail for your focal area.

Paint from thin to thick, transparent to opaque. Shadows are usually most effective if they are somewhat transparent. Avoid adding white to your shadow colours until you need to modify the colour and/or the light later on in the painting process.

Lay down your brush stroke, and leave it alone. Don't mush your brush back and forth along the same stroke; that destroys all the character of the stroke. And do try to stroke, not jab, dab or stab.

Consider your composition first. It's important to go into the painting stage with a plan, so several thumbnail drawings of your subject are always a good idea. These are small, simplified drawings, with no concern for detail, but looking at balance, shapes, arrangements of lights and darks, etc. Interesting composition tends to avoid placing your centre of interest actually right in the centre of your painting! A good starting place is to divide your canvas into thirds, both horizontally and vertically. The points where the thirds meet are good focal areas.

The first thing I like to do with my canvas is give it a thin wash of colour all over, very roughly. This is called the imprimatura, and it gives you a mid-tone to work on, which makes it easier to judge your darks and lights. I usually do my initial drawing directly with a brush and thinned paint. In the example you can see how scrubbed on and rough the imprimatura looks. I have only concentrated on the big general shapes, nothing fussy.

The next stage is blocking in the darks. I tend to to use cool dark colours, at least in the beginning - blues, purples and cool greens. They can always be overpainted later if they need to be lightened a little or warmed up. Then, consider where the lightest light(s) will be. Often, this will be the sky. Now you have a pretty good idea of the range between the darkest dark and lightest light. Everything else will relate to these. The roof of the tower will eventually be fairly dark, but I don't want to lose it in the dark of the tree at this stage, so I'm going to leave it alone for now.

Notice that the sky is not a solid blue. It's lighter towards the horizon (and maybe a tiny bit yellowish) and the large areas of blue are broken up with some paler, almost white, shapes. I haven't tried to paint anything that looks like a puffy cloud, just the suggestion of clouds.

Now we get into the real landscape colour - green. It's very important to vary your greens. Look at how deep and rich the midground trees are, compared with how cool, bluish and paler the far background trees are. The hedges and lawns are much warmer, with more yellow and orange added. Some of the shadows have been modified to give them a little more colour and light. A point about brushwork - don't try to smooooth out all your strokes! An important part of the Impressionist approach is to have distinct brush strokes with varying colour side by side.

With a lot of the foliage taken care of it's time to look at the tower and bridge. Now I can look at the lights and darks of the architecture in relation to the surroundings. Even though the tower will be lighter than this in the shadows, I still want to be sure that I'm keeping the sides distinct from each other - light, mid-tone, and dark. I'm also starting to work in some of the colour on the paths and the far background buildings.

I can start to fill in the colour of the stonework now. I have no intention of trying to paint each individual stone and brick, but I want to leave a strong impression of the difference in texture between the tower and the trees. Individual strokes, laid down and left alone, are the key here. You can see that the shadow side of the tower is now considerably lighter than the previous step, but each side of the tower is still seperate. Can you see a hint of warm reflected light in the shadow side of the tower? I've also cleaned up the paths a little, with better definition of the lights and darks.

Some finishing touches and the sketch is complete. I've added more detail to the left side hedges, defined the distant tree trunks and added some sky reflection and accent darks to the canal.

Voila!
Posted by Scott Cooper at 2:23 PM No comments:

I had the pleasure of leading a drawing workshop on Saturday at the Neilson Park Creative Centre in Etobicoke. "Shades of Gray" focused on using various drawing media on toned paper. The idea here is to use the tone of the paper as an overall mid-tone, and draw in the darks and the lights. This challenges our ingrained habit of filling a white sheet with dark marks to indicate form, often with interesting results.

The first exercise was the old "make a circle look like a sphere," using charcoal or carbon pencils, wax-based coloured pencils, and "white charcoal" pencil. (If anyone knows what goes into making General's White Charcoal pencils, I would be very interested)  From the very beginning I encouraged the group to use line for basic layout purposes, but ultimately to pay more attention to the value masses, and how the relative lights and darks interact next to one another. 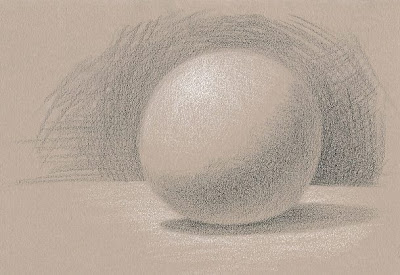 The next challenge was to draw a carton of eggs, and I don't think it made me any new friends... This one really showed that this technique requires the artist to think differently about representing values. There were times when it was more advantageous to add white to the shadow area of the eggs, because the midtone of the paper was too dark!

After a short lunch break, things were a little more open, with each artist choosing their own subject matter from a selection of reference photos: flowers, a portrait, a landsape, a dilapitated old barn, etc. I demonstrated an ink-wash technique during this time. 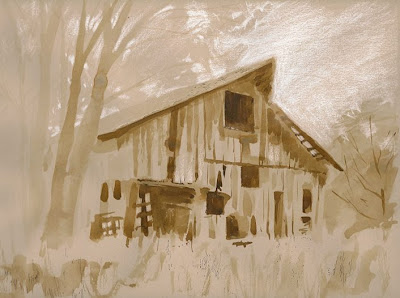 The focus and concentration was very intense, and the group tried a number of techniques, including brush drawing, pen drawing, and coloured  and watercolour pencil, often in combinations. They were a tired bunch by the end of the day, but they all felt very pleased with the work they had produced. 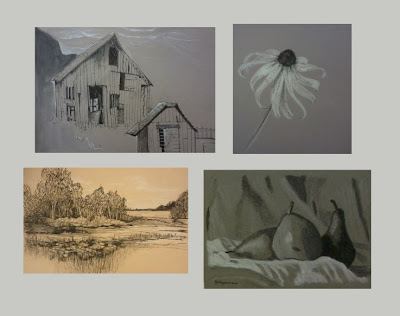 I must apologize to some of the participants if their work was not included in the post - my camera let me down, and I lost about half the shots I took. I am very sorry.
Posted by Scott Cooper at 10:37 AM No comments: