I was very pleased to receive notification today that I had garnered an Honorable Mention in a recent painting challenge. This is an online event at Artist Mentors Online, a project of Kevin Macpherson. This was very exciting personally because I hold Kevin in great esteem as a painter and teacher. I highly recommend his two books, Fill Your Oil Paintings With Light and Color, and Landscape Painting, Inside and Out.

The challenge for this painting was to use a single large brush for the entire painting. In my case, I used a Princeton #12 syntheyic flat (about 1" wide) on a 12 x 16 panel.

This is a view from Picardy in northern France. My wife and I had the good fortune to spend two weeks in Europe this summer, and much of our drive was occupied with visiting First World War memorials. We had stopped at a memorial for Canadian soldiers who lost thier lives at the Battle of Courcelette, and this was the view across the fields towards the village. I have plans to do more paintings from that trip, from images of the Netherlands and Belgium, as well as France.
Posted by Scott Cooper at 5:42 PM No comments:

At the end of my last class at Visual Arts Mississauga a couple of weeks ago, one of my students asked if there was some way I could post online to show her how I would go about finishing a demo that I had started; she wanted to see how I would solve some of the problems of water, in this case a sun splashed creek. So...

This is where we left off in class. I hadn't actually planned to do any more with this demo, and it was more than likely that the panel would simply have been gessoed over and used for another demo. (It could still happen...)

This was a bit hurried, as demos sometimes are. I probably rushed the glare on the water without doing more preparatory underpainting first, but I needed to move it along for the class. The foreground bank on the right hasn't been touched since the initial lay-in of colour, and I think the strip of glare in the background needs to be more contained in a curve of the bank, and the far b/g us totally understated. 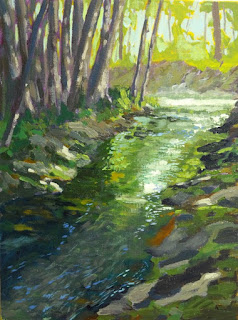 Now the right-hand bank is more finished; it is still very much a suggestion, not a highly detailed depiction of rock and mud and undergrowth, but part of the focus in this class was on a more spontaneous look, not a laboured copy of the reference. The foreground surface of the water has more sky reflection on it now, streaked in places to indicate the movement of the water. Similarly, the midground water has been modified to show a bit more ripple and sparkle. There is some sun-dapple on the tree trunks, a bit of dapple on the left-hand bank, and some pale trunks have been suggested in the background foliage. The right-hand bank has brought around in a little bit of a curve to left to crop the strip of glare on the b/g water, but it has mostly been cropped in the photo (sorry!)

To create the illusion of transparency, I think the foreground water needs to be treated in layers. the lowest layer is dull greys and grey-greens. There is a suggestion of stone and rock in the creek bed, but there is not a lot of contrast, the edges are rather soft. Subsequent layers add more colour and indicate motion in the water, and the sky reflections are placed at the end.

I hope that helps. If there questions, ask them in the comments section and I'll do my best to answer them.

See you in the studio!

Well, teaching is over for the term and the anxieties of the Christmas season are upon us. I would like to thank my students for a rewarding Fall term; I find that I learn a great deal from the teaching side, and, as we always hope, the paintings continue to improve. I look forward to the new year with some trepidation; the portents are murky and the path often meanders, but there is always painting. I hope to see many of you again in my classes in the new year.
Posted by Scott Cooper at 12:05 PM No comments: