I'm pleased to tell you that I have been invited to participate in a group show at the Gallery in the Garden at Sherway Gardens in Etobicoke. "L-attitudes" includes three other painters, Stan and  Louise Zych and Carole Braiden, in a wide-ranging approach to landscapes. There is work from Cuba to Central Ontario, from extreme realism to highly whimsical imaginings. The show runs in the public space until February 11. The image below is titled "Mother and Child,"acrylic, 16 x 20, a view from Georgian Bay in central Ontario.

Posted by Scott Cooper at 9:30 PM No comments:

I was approached last summer to create a painting of the Georgian Bay area for a client's new office. The initial request was proposed as "reasonably large", which got me thinking around 18 x 24 or maybe 22 x 28. Then I saw the actual wall and came home and cut a 24 x 36 panel. For me, that's big. After a couple of false starts things started coming together. Finally, after all the Christmas merry-making was done, I made a couple of requested changes and it's done. Even though it has been a few months in the making, it counts as my first finished painting of 2012. "Royal Island Stairway", acrylic, is taken from an island near the Georgian Bay Islands National Park, one of Canada's national gems. 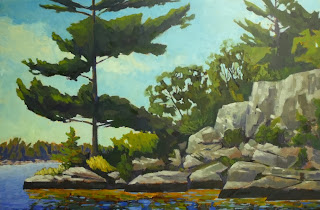 Posted by Scott Cooper at 10:18 AM No comments: